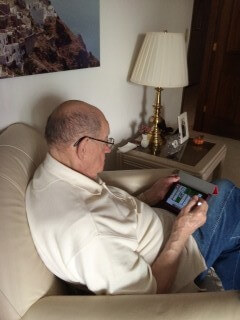 Gawkie never made an effort to adapt to the new technology that was becoming so common with younger generations. He once owned a computer for three whole days, and got so fed up with it that he told the young man down the hall in his apartment complex "As long as that thing is gone by tomorrow morning, you can have it for free. I don't care what you need to do, I just don't want the darned thing, get it out of here!"

Since he was introduced to the GrandPad a few months ago, he has used it every day that he could - sometimes his wife just about has to yank it out of his hands to get him to clean the dishes! The simplicity of the device and the capabilities it has means that he can easily stay connected with his kids and grandkids without all the frustration that can come from using a regular computer or smartphone.

"Holy cow I am having a great time. love you. dad"

- Gawkie's first email ever, to his daughter, thanks to GrandPad

The cartoon this week gave me a big laugh so I just had to return your message. I enjoy your messages and your pictures. Thank you so much for being so nice to me, I appreciate it and thank you for it.
I get up in the morning and the first thing I want to do is check the GrandPad to see if I got any new emails or pictures.
I love solitaire, I play it every day since I got the GrandPad. I can sit right in my chair and play, that way it's good for my back.

- Gawkie, using the Email, Photos, and Games built into the GrandPad

My Dad had never emailed before. Now at 92 years old he's loving emailing his kids and grandkids. The voice emails are priceless. Nobody wants to delete them! My dad loves the Grandpad so much. It's the first thing he does when he gets up in the morning and the last before bed! Being out of town I don't get to see my aging parents often enough. Video calling has been a fun way to see them while living far apart! It's so fun for my parents to get pictures from kids and grandkids. It makes them feel so much more connected!‍

I never thought I would ever be able to send a picture to my grandpa like this, it's amazing how easy it was for him to get up to date on technology‍

Thank you! Your submission has been received!
Oops! Something went wrong while submitting the form. Please contact us if error persists, we may already have your email on file.
Margaret
Paul "Gawkie"
Clarabelle
Joan
Willi
Techsilver 2021